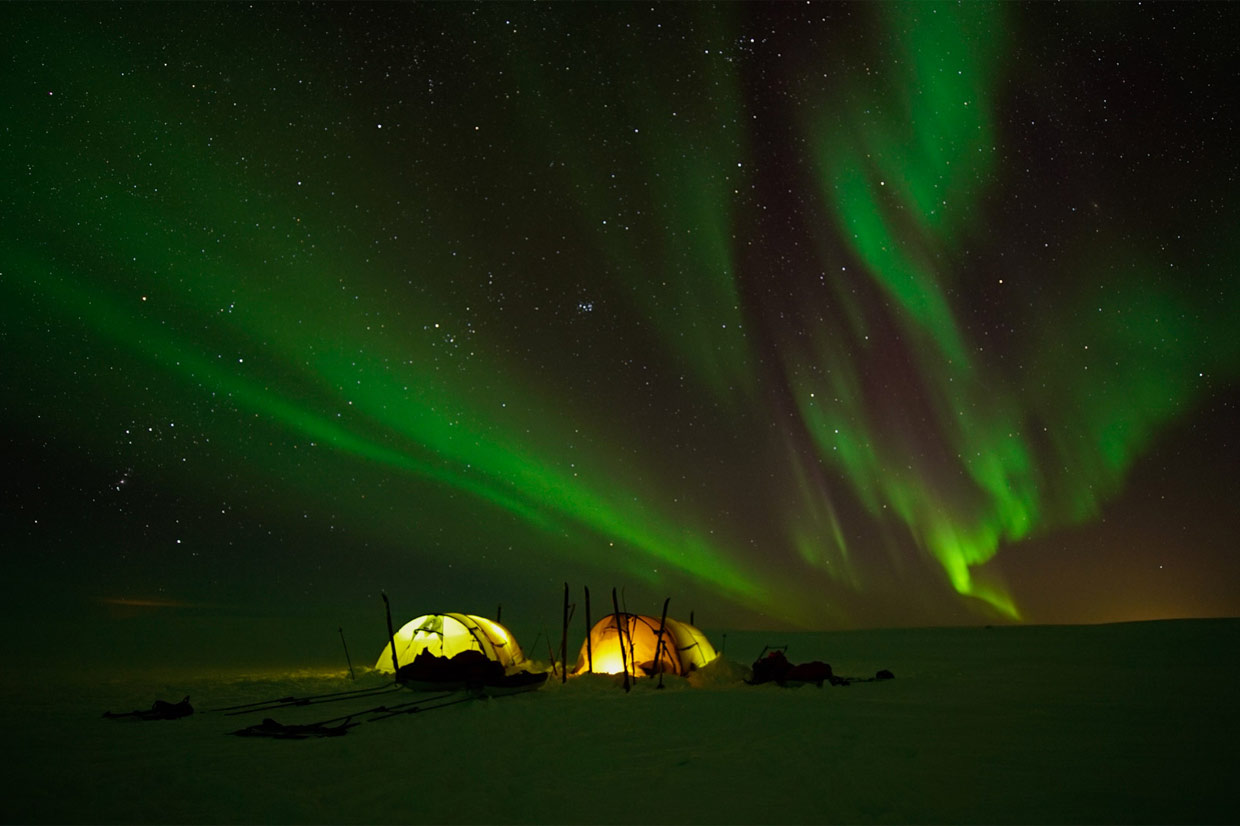 The wind was relentless. So cold it took my breath away, so strong it felt like I was fighting my way through a wall of treacle. Part of me wanted to stop, but there was no such thing as stopping. I was a hundred kilometers from anywhere, surrounded by nothing but snow and ice. I had to keep going. I kept my head down and slid one ski in front of the other. I could do this.

I was in the far north of the Arctic Circle in Norway, crossing one of Europe’s largest ice plains, Finnmark Plateau. I was part of an all-female expedition, cross country skiing 200km in two weeks, in temperatures as cold as -25C and pulling everything we needed behind us in pulks. We had nothing but each other – and the changeable forces of Mother Nature – for company.

Our team was led by the ever-capable Liv Engholm, co-founder of husband and wife business Turgleder Expeditions. Our team of seven (eight if you count the dog, which you should) skied from Hatter in the North of Finnmark, to Karasjok in the South. We ended at Engholm Husky Lodge, an eccentrically-beautiful lodge built by hand by Liv’s own father. It was also her childhood home and the place where her love of nature was born and nurtured. After 14 days on the ice, I felt like I had skied into heaven.

After my first shower in a fortnight – and reveling in the feeling of clean clothes against my skin – I crunch through the snow towards the communal dining lodge where I’d organised to interview Liv. On my way, I spot her Dad in his workshop, the warm glow of candles lighting the dark just enough to see the concentration etched on his face as he whittled away at his latest creation. It was like watching Santa in his workshop. Calm, creative and so clearly in his element.

I get to the lodge and bask in the warmth of the log fire, a welcome change to the howling winds and icy temperatures of the past two weeks skiing and camping.

In front of me is a candle holder carved from the antler of a reindeer, the bench I am sat on is made from wood felled from the surrounding forest, even the door handle I’d grasped to enter the room was made from a branch; sanded, varnished and taking on its new function as though it has been grown for it.

A PASSION FOR NATURE

“My Dad is… how shall we say? Passionate. Yes, he’s passionate,” smiles Liv. “It’s like his heart is really deep in nature. For him, this place is all about making things out of the local materials and he designed and built almost everything himself. It’s just the knife (metal) work that he doesn’t do.”

The lodge is exquisite. Ten uniquely-designed log cabins of various sizes, each handcrafted by Sven Engholm’s own enviable imagination and steady hand. A traditional wood fire sauna, the ever-smiling staff dressed in traditional Norwegian knits, and the haunting howls of 60+ huskies combine to make this a seriously special place.

For me it felt even more special; not only was this the end point of an expedition that I’d trained for for eight solid months, but it was also deserted. Myself and my teammates were the only guests thanks to COVID-19 forcing all other guests to leave. Technically, we should have left Norway already too; but we’d been unaware of the situation thanks to having no phone signal whilst skiing.

“This was a very special place to grow up,” says Liv. “I took my first dog sled ride at one years old. You’ll see a little sled hanging on the wall in the dog yard – that was mine. I had one dog with that one, then I got a bigger sled with two dogs, and then I’d hang on the back of my father’s sled with 10 or 12 dogs.”

Having spent 17 days with Liv, she’d seen me at my best (whenever I was eating) and my worst (attempting to ski uphill whilst swearing profusely). I felt like she’d got to see sides of me that not many people in my life do – something that happens when you’re in the wild. Engholm Husky Lodge felt like a fitting end to the trip because it turned the tables, giving us an insight into her.

“When we have guests like you who have joined for 17 days, we get to know each other,” says Liv. “You’re really close in the tents, you do all things together; eating, crying, and sharing all the ups and downs. Ending here gives me the opportunity to let the guests see where I grew up. This fantastic place which my family has built up over the years, log by log, rock by rock.”

Sven’s partner Christel Finne helps run the lodge and this passion for working with family was clearly passed on through the generations. Liv runs Turgleder – meaning joyful journey – with her husband Thomas.

“We met in the Army,” explained Liv. “He’s been hunting and in the mountains since he started walking, so we always had this shared love of nature and the outdoors.”

The couple met in 2001, got together in 2002 and in 2005 they launched Turgleder in the hopes of turning their hobby into a lifestyle business. Although they started by offering day trips for tourists, the passion has always been for longer expedition-length trips like the one I’d just completed.

“The longer trips have always been the motivation,” explains Liv. “What inspires us most is when we get to inspire others; and longer trips do that best. The money is in the day trips but for us it’s not about the money.”

Neither family business has a desire to grow much bigger than they are today; complementary lifestyle businesses that allow them to share their love of Norwegian’s unique natural environment. They’re successful, but still allow the all-important work/life balance that drives them.

“We want to be outside ourselves,” says Liv. “Not just sitting in the office organising and doing admin. We also want to continue to guide ourselves.”

Turgleder has two other full-time guides, Kasper and Ingvild. Ingvild was the assistant guide on our trip (the aforementioned dog, Serma, was actually Ingvild’s dog, who was chosen specially so that she would complete our all-female line up). But much of the guiding is still done by Liv and Thomas themselves. They used to guide together, but since the birth of their son Odin, they now take it in turns to take guests out.

“Odin is two and a half now,” says Liv. Her eyes light up at the thought of him. They’ve been apart for over two weeks and she can’t wait to get back to Oslo and see him and Thomas. “The first year I didn’t want to leave him. I missed him, but also, I was breastfeeding so it was hard to go away. That first winter I had three trips and I had to continue (breast) pumping on the trips to express milk.”

Having spent two weeks with this formidable woman the idea of her breast pumping in -40 degrees whilst simultaneously cooking dinner, melting snow for water, and checking in on the guests doesn’t just seem like a possibility – it feels like she wouldn’t even break a sweat.

As Liv starts to explain the life that Odin lives, I can’t help but be a little envious of the toddler who has already experienced more adventure than many people do in their lifetime.

“He spends a lot of time outdoors now,” she says. “He can make a fire, use a saw, use a sharp knife, cut wood. I heard that today was his first time with matches, he burned himself and then five minutes after he wanted to do it again. It’s learning by doing.”


THE ART OF LEARNING BY DOING

Learning by doing. It’s something Liv said to us time and again on the trip. She would say it each time we fell over (which happened a lot), each time we put the tent up the wrong way round (happened more than you’d think), and each time we let our gloves get wet and realised only when the sharp pain of frostnip began to burn the tips of our fingers.

The motto had done me well. I would stand up from my fall, brush myself off and keep going. And the motto appears to have done Liv and Thomas well in business too. Alongside the tours that are their bread and butter they have developed an unexpected niche in TV production, helping TV shows access the wild and untamed Norwegian wilderness.

“We got asked to help on one show and it grew from there. Now we’ve become a bit of a local facilitator helping TV companies organise everything,” says Liv. “A lot of it is reindeer related but we also introduce people to the local Sami communities.”

TV shows they’ve assisted on include adventure show ‘71 Degrees North’ and a slow TV production for the BBC called ‘All Aboard – The Great Reindeer Migration’.

Turgleder’s entire business has grown organically. Word of mouth – for the expeditions and the TV work – has been the primary source of business, and Liv’s Dad hasn’t ever spent a cent on marketing his lodge. Having stayed there, it’s easy to see why he wouldn’t need to.

But as always, running family businesses isn’t always smooth sailing (or skiing should we say).

“It’s hard to just put work away,” says Liv. “You have work and life and it’s all mixed up. You can’t count hours. You work early or late or simply when it’s needed. It’s all one big bowl which can sometimes be difficult. But also, you have the flexibility to just take off if you want to so it makes it all worth it.”

Although we spent two weeks together, it wasn’t until I sat down with Liv in the warmth of her father’s lodge that I realised how many similarities there are between the trip we’d just done and running a family business.

The ups and downs, the doubts and celebrations, the struggles and the victories. And through it all – the overriding sense that no matter what – it’s always worth it in the end.