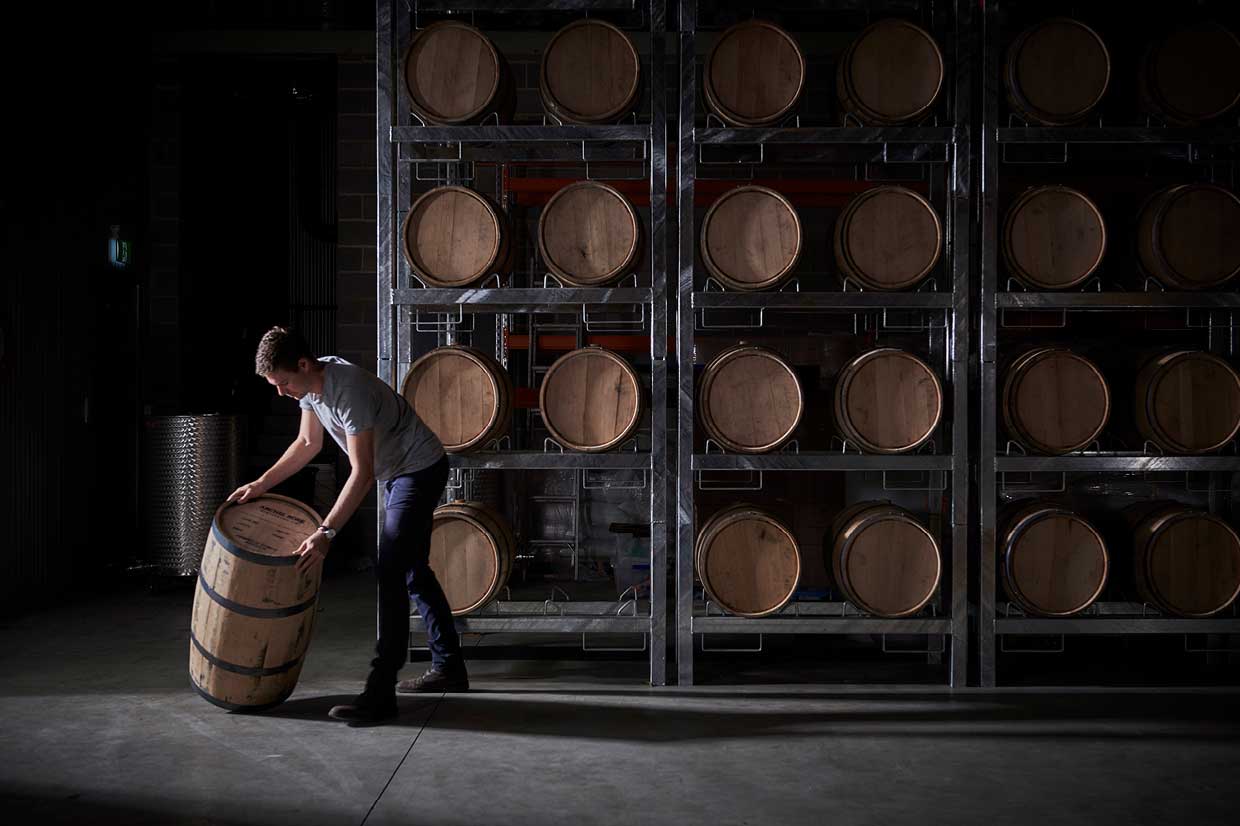 How does someone go from a secure job in the corporate consulting world in Sydney’s CBD, to launch a spirits distillery in an industry that is fraught with challenges – high overheads, strict government regulations and global competition with deep pockets?

Well, you have to have the name Will Edwards.

And have an incorrigible spirit.

I meet Will Edwards, the charismatic young founder of Archie Rose on a warm summer morning at his distillery in Rosebery, Sydney. Archie Rose, for those of you who sacrilegiously don’t know anything about this culture defining company, is a spirits distillery that has firmly set the benchmark for the industry, dare I say, around the globe. Will has done this with innovation, passion and an abundance of grit.

“I was interested in making things, I made a lot of stuff. I really liked the idea of creating something tangible. I’d go to classes and learn how to make cheese then I’d go and make sourdough and then very unsuccessfully salami. Had to throw that one out. At university I experimented with making homebrew and some cider, then that evolved into having little oak casks. It was a progessive journey to get to spirits,” shares Will.

It seems that Will was born with an innate desire to create.

Will gives some context to where this trait may have come from.

“My Mum is very creative in the kitchen. We had chickens and veggies in our garden growing up (in suburban Sydney) and she would make everything from scratch. She was adventurous. She would plant some exotic vegetable or start carving up the backyard to plant corn. My Dad also had a connection to produce. He grew up on an orchard out of Orange, and we would spend many holidays back on the farm with our grandparents. I learnt to appreciate the process of creating something from scratch.”

So when Will decided to leave his consultancy job at Deloitte, which he had enjoyed, he was keen to get his teeth stuck into something where he could see a project through from inception to finished product. As a consultant he would rarely get to be part of the execution. Once the team had provided the solution, the client would take over and implement.

Will tells me that he really had set himself a challenge by deciding to make spirits. In other alcohol categories you could start by brewing at home. You could make as much as you want as long as you don’t sell it. This means you had a chance to perfect your product without big overheads. When it comes to spirits the licensing doesn’t allow for this. You need federal licensing to manufacture and sell spirits right from the get-go. So if Will wanted to make spirits he needed an unwavering belief in what he was setting out to do and invest.

Will read anything he could get his hands on when it came to spirit production. He immersed himself in the chemistry and theory that underpins the making. Whenever he went travelling, he would test out and visit distilleries.

“I went to Tasmania a few times to visit distilleries and I took my girlfriend at the time (now Will’s wife) to Tasmania for her birthday. And wherever we went there just happened to be a distillery!” Will grins.

Will also spent time in Brooklyn, New York where he explored the first distilleries that opened after prohibition. Seeing how those guys had set up inspired Will. It was aligned to what he was thinking.

“The distillery I spent most of my time at was Kings County, at the Brooklyn naval yards. They’re still around, and we still chat to them every now and then. They had started distilling in an apartment above a dry cleaner before moving into their heritage building that was sort of falling apart. It was a beautiful building, and a beautiful setup. I came back from that trip knowing that I absolutely needed to find out why you can’t set up a distillery in Sydney. In my mind, if you could then someone would have already done it,” shares Will.

WHAT MAKES OPENING A DISTILLERY SO HARD?

Will discovered that the first hurdle is the investment. It’s a huge investment to set up all the equipment. You actually have to build a factory. You need a site and the stills all need to be handmade. They are made from copper. You can’t just buy them off a shelf, well not in Australia and not for the purpose Will wanted.

Secondly, it is the way the licenses are set up. You had to get local council approval, state liquor licensing, federal licensing and they’re all separate. And the federal licensing wouldn’t consider your application until you had built and commissioned the distillery.

“So I threw everything that I had into it, which was a decent amount but certainly nowhere near enough. Then I went and tried to convince family members that this was not a stupid idea and that they should invest. It took a long time to convince them. I’m close with all of my family, but when it comes to business our interactions are very commercial. I kept hearing no, no, go away until you have a full business case, run through all of the financial modeling and effectively come back and pitch why this isn’t the dumbest idea in the world. So that took a while,” explains Will.

It took Will over a year to figure out why it hadn’t been done, how to do it and work through all of the business planning and financials.

“Sydney has got a great bar scene, but there was no one making spirits here. We’ve got a history in spirits and distillation. I couldn’t understand why we didn’t have local spirits, it didn’t make sense,” says Will.

I’m still perplexed as to why Will, despite his curiosity, would invest everything he owned and convince his family to invest on such an unknown? It is risk taking and bravery beyond.

Will explains… “I tend to get a bit obsessed with things. And if I decide I want to do something, I’ll just do it and I’ll move heaven and earth to make it happen. There’s not really a lot that will stop me when I put my mind to something. Like the time when I decided to get fit. I was slack on exercising where previously I had been in relatively good shape. I was like ‘this is bullshit, I need to get back into properly exercising!’ Instead of gradually building up I said fuck it, I’m going to run this 12km trail run, but there was no warmup. Of course it was the dumbest idea ever, I got injured and I couldn’t run for about six weeks. But it got me started. Once I decided that I wanted to do this distillery and that it was possible, there was no turning back. I was 24. I was naive. You don’t know what’s going to go wrong. You don’t know how hard it’s going to be. You don’t know, what you don’t know. And that gives you an advantage. You have no fear.”

IT’S ALL IN A NAME

Will found a site in Rosebery, Sydney. The suburb was named after a gentleman called Archibald Primrose. Will decided that this was good inspiration for the name of the distillery, so he did some investigation. Good old Archibald Primrose turned out to be a not very impressive British Prime Minister with mixed popularity, so that idea was parked. Will did really like the name Archie however, with the Rose linking the distillery and the brand to the suburb of Rosebery, so that regardless of where the spirit, brand and distillery go in the future there is always that tangible connection back to the location it all started. So Archie Rose was born.

In launching Archie Rose, Will and his team had an obsession with excellence. Right from the beginning Will decided to make his spirits differently. With whisky they didn’t just use two malts like most distilleries, they used six. The majority of the malts are roasted which makes them difficult to work with, but the flavour he gets is amazing. With gin, Will and the production team continue to innovate a unique distillation approach including equipment that will be the first of its kind globally, to optimise how botanicals are handled and distilled to maximise flavour and diversity.

This includes being the first in the country to distill every single botanical separately rather than together. Which means they can tailor the flavour and create production specs for every botanical instead of having to average it across the whole lot. For the customer there is clarity of flavour in every bottle.

Creating a distillery of world firsts does come with its challenges…

“Because we’ve been committed to all of those unique processes and designed equipment to perfectly suit, it means when it came to building our second distillery to keep up with demand, the project was one of a kind. Every little component was a custom job. It became difficult to forecast lead times and costs. When you’re out there getting things manufactured that haven’t been done before it’s like being in the wild west. It’s expensive and so far it has taken us 2.5 years.

Will tells me there was no choice but to build a second distillery. They do many things that are unique and therefore run a lot of trials and do a lot of R&D. With just one distillery they were struggling to balance the R&D and the core production. So the pressure has been on for the last few years, but it will be game changing once the second distillery is up and running.

WHY HAS THE COUNTRY FALLEN IN LOVE WITH ARCHIE ROSE?

Archie Rose seems to be the brand on everyone’s lips. I’m fascinated to hear why.

“We’re pretty open with everything we do. If you’re into spirits, you can go as deep as you want. Traditionally distilleries have been quite closed, how they do things and processes are all very secretive. We on the other hand share how we produce and why we produce things the way we do. And we even share our mistakes. We release our trials to the public. People get to see beyond the surface,” shares Will.

Another reason, I suspect, for Archie Rose’s success is that they have a brilliant bar and events team. They take Archie Rose to the people. So you don’t have to experience it by coming to the distillery and having your distillery tour. The brand is interacting with people on their terms.

Archie Rose certainly is one inspiring brand. They are leading the way for spirits in Australia by creating a real community in the making of their products. They endeavour to source or grow all of their ingredients within Australia, working with local growers. And they have big plans in terms of putting Australia on the map in the global spirits market. Will tells me they will embark on a major campaign overseas to showcase just what these little Aussie disruptors are doing for the industry.

Pretty impressive for a guy in his 20s who didn’t really know what he wanted to do, but knew he just wanted to make stuff.