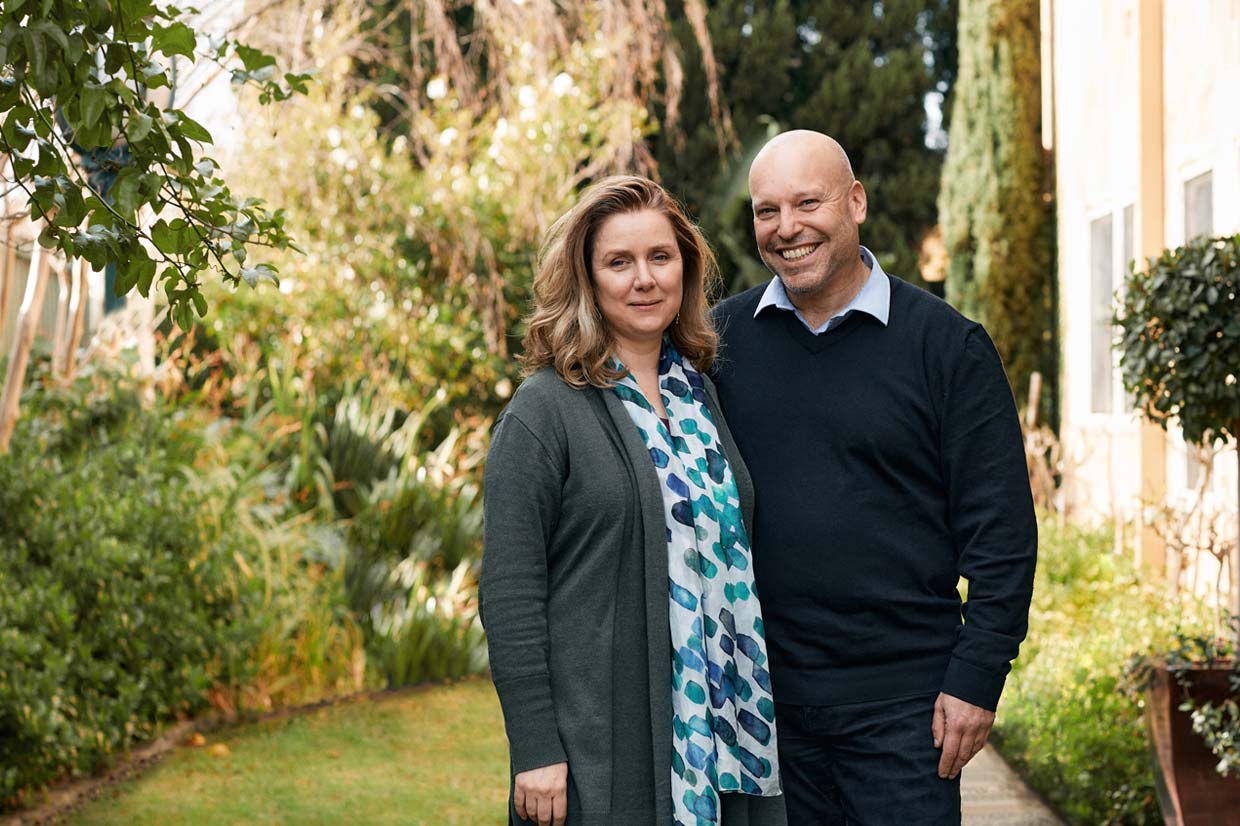 EVERYONE HAS A SEAT AT THE TABLE OF PLENTY

“You really need to tap into a big ‘why’. We managed to do this and it’s provided us with unlimited abundance of energy and motivation from day one.”

Snacking is one of the most effective ‘pick-me-ups’ to combat the 3pm ‘afternoon slump’. And, what we choose in those moments can either deeply nourish us or it can be an indication that we don’t truly prioritise the health of our body and mind. Seems like a lot of metaphorical weight to put on a fun-size choccie bar, pack of chips or sugary treat. But ultimately, these junk-food snack choices aren’t great ones when it comes to our holistic health. When we scoff down something for temporary culinary joy, we’re not really thinking about the long-term benefit to our body and that tells our mind that we’re willing to compromise on the one thing we can never buy or replace — our health. Luckily there are better options out there…

Table of Plenty has built their entire brand on this sentiment — that food is just one element in the larger picture of life and nourishing choices in that respect can help set us up for a more complete sense of happiness and health. Founded by deeply passionate couple, Kate and Tal, their story is truly unique and extremely heart-warming. And we’re the lucky ones who’ve been trusted to share it.

From two very different parts of the world, Kate and Tal found their way into each other’s lives.

Growing up in Tel Aviv, Tal describes his childhood as “magical”. Living in a big apartment block where he was free to meet and play with other children. Moments of joy that the previous generation were stripped of because of the Nazi regime… Tal was also heavily influenced by the stories his father told of surviving the holocaust. Tal’s father and brother were the only members of the family to make it through those devastating events and have the opportunity to build a family of their own. During Tal’s upbringing, Israel was in a time of renewal, trying to “claim its own space in the world” with a population of immigrants from all over Europe. So in a way, Tal’s childhood shaped him to be a creator and taught him to carve out his own unique place in this world, to seek purpose for the life his father had fought so hard to give. Meanwhile Kate’s English father and Kiwi mother raised her and her siblings in England. Where she dedicated her spare time to violin practice and developed a passion for studying languages. It was really this interest in language that initiated Kate’s adventurous early adult life. After a two year stint in Germany, Kate set her sights on a trip to Israel and met Tal’s older brother just prior to arriving. The elder sibling suggested Kate get in touch with Tal when she reached Tel Aviv, and she did… and the rest (as they say) is history.

Seven years on, they had created a life for themselves in Israel — but something was missing. Tal had heard so many tales of Kate’s travels and began to desire some adventure of his own. An opportunity came up to study at Monash University in Melbourne, so with just a few bags packed for what was meant to be an eight month trip, the couple jetted across the globe to experience the Australian way of life.

LIFE HAS A PLAN OF ITS OWN

Very shortly after arriving in Australia and starting a new job, Kate fell unexpectedly pregnant. Though not part of their immediate plan, as Kate says in her own words “there is never a good time to have a baby” — and when we chatted about this, it wasn’t meant in a negative way. Moreso that there will always be a reason not to invite such monumental responsibility into your life and moving countries and starting a new job are probably quite valid ones. But what Kate meant by this is, you’ll probably never really feel ready, so Kate and Tal embraced this news with love and openness, like they do with most things in life that gets served up to them. As a self-confessed “good girl” who always put her health first, Kate would never have predicted that her baby girl could have any health complications of her own… but she did. After some investigation and additional tests around the 25 week mark, their medical team discovered some abnormalities in the way the baby was developing and Kate went on to be heavily monitored for the remainder of her pregnancy. Just shy of full-term, Kate gave birth to a little girl called Amy. Far away from family and the supportive network of loved ones, the couple were desperate to return home to Israel only to be told Amy probably wouldn’t survive the trip. So they stayed put, and 21 years on have made a beautiful life for themselves in Melbourne.

As a very spiritual couple, Kate and Tal knew that sometimes there is no rhyme or reason to what happens in life and theirs is the greatest example of accepting the things we can’t control with grace and patience. Though even with this approach, they still had their own journey to go on with the difficulties of becoming life-long carers for their daughter. They continued to work in their corporate careers, with Tal travelling quite a bit and Kate struggling to maintain her schedule while caring for Amy, after a few years they realised if they wanted to enjoy a balanced quality of life and be there for each other and their new family — they had to be in charge of their own destiny. Not only that, but it was the arrival of Amy that sparked a passion inside them to do something truly meaningful with their careers. Or, as Tal put it, they didn’t want to just be in “survival mode” they wanted to be “on the contributing side of the equation and turn adversity into opportunity”.

A SEAT AT THE TABLE OF PLENTY

When asked about the motivation behind starting a family business, Tal explains there were three real contributing factors. The first being that the “medical professionals had said Amy would never be independent” so they needed to build a business that could support them, to support her. Secondly, the upheaval of Amy’s disability had made them truly question whether they were fulfilled by the work they were doing. If it was going to be taking them away from their family so much, was it worth it? For Tal, it simply wasn’t. As he explains “you have a fancy title as a director, but at the end of the day you’re just a software salesman”, and it wasn’t what he wanted to be. They wanted to “create an integrated life which meant that your job, your work and what you do in life were all very closely aligned”. Essentially they wanted their work to mean something and to align with who they were as people. Then the third but possibly most powerful — they wanted to “work for something bigger than themselves”. All of this is important to truly understand how much thought is behind the product and the business they’ve so successfully built as a united front.

From here they began thinking about what this business could look like. Kate had a passion for nutrition and spices, and that combined with their determination to create something representative of a holistically healthy life for body and mind — were the inspirational elements behind what would become, Table of Plenty. And, the timing was just right. Back in 2000 there weren’t a lot of healthy food options for the mainstream, though people were becoming more aware of their ingredient choices. So there was a market for it and not a lot of product… the perfect setting for their business to launch.

FOOD IS THE FOUNDATION

Kate believes that “food is the foundation of both mental and physical health”, and that’s what their food aims to support. What their brand sells isn’t just the product itself, it’s the idea that good food, along with working for something greater that yourself, is the foundation for a healthy and fulfilling life. This is perhaps why the brand is so successful, because it’s about more than just what they put on the supermarket shelves. With a selection of healthy rice-based snacks, delicious dukkahs, kefirs, porridges and breakfast cereals — Table of Plenty aims to inspire people to make better choices when it comes to their health and to acknowledge the knock-on effect of this on the rest of their lives. Everything they produce is in its most natural form, because “nature knows best”. One of the most admirable parts of their venture (for us) is the accessibility element. They stock in huge chain stores like Coles and Woolworths, which are possibly corporations that other niche health-food products may snub. But for Kate and Tal — this was an important piece to their puzzle. They wanted healthy food to be “readily available to as many people as possible” and in reality, most people shop at these chains in some form. We absolutely love the sentiment behind this production strategy and it really emphasises that everything Kate and Tal decide to do together has a deeper purpose behind it.

AND, A LITTLE EXTRA GOOD…

If this wasn’t all impressive enough, Kate and Tal have one final element to their business that is hugely important to them — impacting the disability community in Australia (they have a disabled child themselves). This is a huge driver behind the success of their business, as Tal describes it as their “why”. According to him, running a business is a marathon, not a sprint and “you really need to tap into a big ‘why’. We managed to do this and it’s provided us with unlimited abundance of energy and motivation from almost day one”. With their product demand at a steady high, the couple have been able to generate hundreds of thousands of hours of work for people with disabilities to get involved with – including making, blending, packing and logistics – as part of the Table Of Plenty business. The latest project is the first of its kind ‘All Things Equal Café’, which provides work and training for people with and without a disability.

Table of Plenty is truly a brand with a purpose, one the co-founders won’t compromise on for anything. And that authenticity, we believe, is the key to their success.

Learn more about Table Of Plenty.