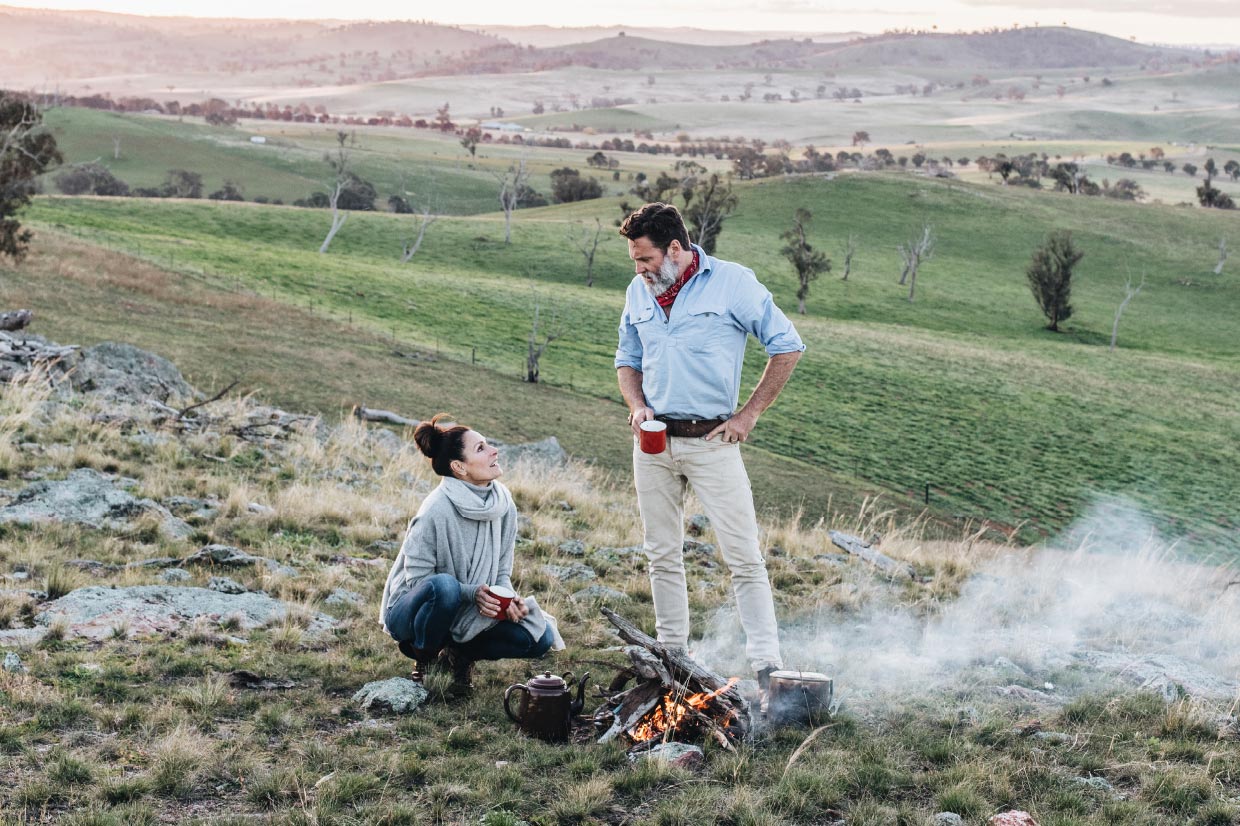 FROM BISCUITS TO BEEF: HOW CHARLIE AND ANGELICA ARNOTT ARE PLANTING THE SEEDS OF HOLISTIC FARMING

The name ‘Arnott’ is synonymous with biscuits, but Charlie Arnott is the first in five generations of his family who hasn’t worked in a biscuit factory.

Charlie’s father, Michael Arnott, started in the family’s Sydney factory, but broke away from the family business that was founded by his great-great-grandfather, William Arnott, to pursue his passion for farming.

“Dad’s career started in the biscuit factory and his father was the general manager,” Charlie recalls. “But his mum’s parents were farmers up at Moree, NSW and I guess he had farming in his blood.”

As Charlie puts it, his dad had a ‘hankering for the bush’ after working on his grandparents’ property, and moved the family up to the southern Queensland town of Dirranbandi. They moved again in 1970 to Boorowa, a small farming village in New South Wales, to establish their own farming operation.

Yet despite switching from biscuit making to farming, the Arnott legacy has still remained a key part of their family history, as well as his mum and dad’s love story.

“When Dad was courting Mum, people used to ask her what he did for a living and she’d tell them he was the guy who sprinkled coconut on the Iced Vovos,” Charlie says. “It was kind of true.”

A SMALL START AND FAMILY TIES

When the Arnott family began farming in Boorowa, it was a mixed operation and Charlie developed a keen interest in working with the land almost instantly.

The Arnotts have now bred and grown cattle at Hanaminno, their 2143-hectare property, for 50 years, with Charlie taking over the operation in 1997.

“I was always interested in the farming game and even though my parents now live in Sydney, my dad still rings up to find out about the rain,” he says.

THE SONGSTRESS AND THE FARMER

It’s not a natural correlation, but when singer-actress Angelica La Bozzetta first met the farmer at a personal development course, there was an instant spark.

“I clocked him and straight away said to myself that I would marry him,” says Angelica, who was part of the popular 90s all-female group The Chantoozies. “We didn’t have a great deal in common, but there was just this innate sense of magic.”

The two bonded over a shared love of food. Charlie was growing it, while Angelica inherited her appreciation from her father’s strong Italian heritage.

“When we eventually got together about six months later, we were in a very safe place because we revealed so much about each other through the Landmark Course,” says Angelica.

If there’s one thing that’s clear about this couple, it’s that they are very much in love, with not only a mutual respect for one another, but the ability to draw out each other’s strengths.

Charlie’s farming career reached a turning point in 2014, when he attended a local workshop titled Profiting from the Drought. He turned away from a lifetime of conventional farming to forge a new path in biodynamic and regenerative agriculture.

He was supported by Angelica, who had always eaten organically, bringing her thoughts on the negative impacts of chemicals to the business table. Together, they decided to pursue an alternative philosophy of regenerative farming practices, shifting their focus from simply growing commodities toward soil health and high-quality food production.

Charlie and Angelica’s focus is on clean, healthy beef under the brand Charlie Arnott Grass Fed Beef, in addition to lamb and pork, which is sold direct to both customers and butchers.

Charlie is now an award-winning grazier and biodynamic farmer: he’s the recipient of the 2018 Bob Hawke Landcare Award and well as being awarded the Conservation Farmer of the year – Lachlan Region, among other accolades. He is also a passionate educator who delivers workshops and advocates for regenerative farming.

The couple now share their time between Hanaminno and Byron Bay with their four children. Charlie is further involved in agricultural training, and delivers workshops at The Farm Byron Bay, a working farm that not only grows and feeds, but also educates its many visitors about regenerative agriculture.

FROM THE PRACTICAL TO THE CREATIVE

Charlie is a grounded, highly practical farmer while Angelica is the creative, who sees the beauty and the potential in what they are doing with regenerative agriculture.

“As far as our skill sets go, I add the creative element to the plans and the future for the business. Charlie is fabulous at implementation, and just gets on and does it,” Angelica says. “I keep the machine running from the back end and have an innate understanding of how important it is to get the message – clean and sharp – out in the world. It is our one shot in agriculture to get the message out there.”

This balance comes from the idea that Charlie and Angelica are constantly learning, growing and challenging their way of doing things in their evolving business relationship.

A CULTURE OF BIODYNAMICS

Key to the regeneration story is its highly holistic approach to both farming and living. This has allowed Angelica to fully support what her husband is doing and ensuring they are working authentically.

“Ange has a strong sense of what things could be and how they could look. Whether it’s a bunch of flowers, a paddock – it’s important that nature is a beautiful thing,” Charlie says.

“Many farmers wouldn’t see that, and only look at the practical aspects. Ange is conscious about putting the culture back into agriculture.”

At Hanaminno, Charlie and Angelica have a culture of biodynamics which is a holistic, ecological, and ethical approach to farming, gardening, food, and nutrition. This in turn, represents the culture of their business.

“We often hear about what office culture is, but people also need to be talking about farm culture, which should always be based around input, not output,” Charlie says.

DEALING WITH THE CHALLENGES

For Charlie, one of the most important elements of running his business is to focus on what he is able to control directly, a part of the job he believes farmers are getting much better at.

“For example, we can’t make it rain, but we can capture as much rain as we can when it falls,” he says.

According to Angelica, another common challenge in the farming space is resistance as well as reluctance to change from traditional farming practices to what some would regard as newer or alternative types of farming.

“I’m loathe to call it ‘the new way,’ because regen ag is ancient,” she says.

“We never want to put anyone down, so I am very conscious about just comparing me to my old self. And through that, I can hopefully inspire and highlight that there is a different way for other farmers to think about it,” Charlie adds.

During their time at Hanaminno, Charlie and Angelica have learned a number of lessons not only about businesses, but about life, as well. As a second-generation farmer, Charlie is hyper-aware that nature is undervalued as the farmer’s most valued business partner.

“We use nature as a resource and tend to think that it’s there to be used or conquered,” he says. “Yet, if we considered it as our business partner we would treat it very differently. We’d stop battling it and instead, work our farms better.”

Angelica adds that it’s important their culture on the farm translates to their branding.

“You have to have a very clear idea of your mission, with defined values that help make decisions in the business,” Angelica said.

“If the business is floundering and something is not working, it is because the true understanding of your value system is missing. I heard it expressed just the other day – when someone is living true to their values, it shows in the way they look”.

For Charlie and Angelica, this motto certainly rings true, as they enact their values every day through their holistic farming practice, from Hanaminno to Byron Bay and beyond.