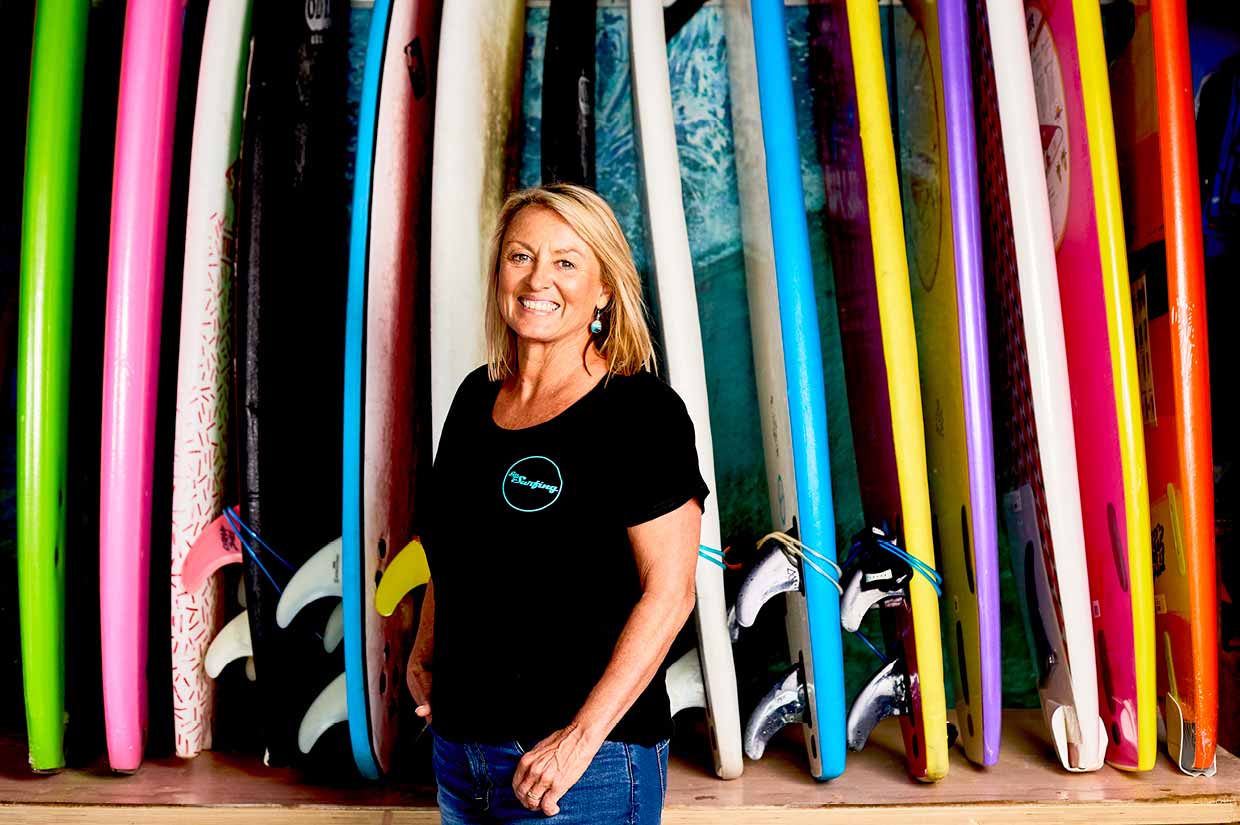 Nowadays, surf schools line Australia’s golden beaches. But 25 years ago, that wasn’t the case. In fact, surf schools didn’t even exist – until one family business paved the way for a brand new industry.

Back in 1995, Brenda Miley – co-founder of surf school Let’s Go Surfing – was working as a school PE teacher in Sydney’s eastern suburbs. But she always felt like a square peg in a round hole. While she loved teaching, her days were spent dreaming of her true passion, surfing.

“As a kid I was always in the water,” she says. “I lived in Coogee and would walk to Tamarama every day of the school holidays with a board under my arm. I’d be in the water for six hours straight and barely even say hello to my friends. I was always sort of on my own path.”

One of the only women on Sydney’s surf scene, Brenda was also a competitive surfer. She was always disappointed at the lack of women not just in competitions, but in surfing in general. Then, in 1995, a lightbulb moment hit.

“I was one of the only female surfers,” she says. “And I thought to myself, I’m a PE teacher. I’ve got these skills, why don’t I start teaching women how to surf?”

Unlike today, where specific licenses are required, back then all Brenda had to do was write to the local council to get permission. And so, Let’s Go Surfing was born.

From the back of a VW Kombi van, she began to teach at the now iconic Bondi Beach. Her musician boyfriend (now husband) Craig ‘Wacca’ Wachholz, was managing a surf and ski shop part time, meaning the hire gear was also taken care of.

“We soon realised the market was bigger than just for women,” Brenda continues. “As a teacher, I knew how to put programs together and also how to teach kids. So we started kid’s lessons too. They were full without even trying.”

FROM THE BACK OF A VAN TO THEIR FIRST SHOP

In-between building a business and working as a musician, the couple also got married. For their honeymoon they decided to travel up the east coast of America visiting surf schools, to ‘see how the pros’ did it.

But it turns out, the Americans didn’t do it half as well as they thought.

“The USA was where everything was happening when it came to surfing,” says Brenda. “So we thought that the surf schools would be massive. But no-one was doing anything. In fact, we were doing a better job than anyone. It was then that we thought…perhaps we could do this full time?”

When they returned, the Kombi was busier than ever. And, as more and more people started to visit the van each day, Craig suggested it might be time to think about something more permanent.

“It got busier and busier,” Craig says. “And we were lugging wetsuits to and from the rental store I was working at. It was a lot of work and we knew it wouldn’t be sustainable if we wanted to grow.”

Finding a retail spot in Bondi wasn’t easy – even 20 years ago – but the couple eventually found a spot on North Bondi, where the flagship Let’s Go Surfing store remains today.

FIND THE RIGHT PEOPLE TO HELP

After a few years, Let’s Go Surfing’s offering was challenged by other surfers who saw what Brenda and Craig were doing and wanted a slice of the action. Seeing the potential for growth and a need to legitimise, the council put the rights to teach surfing at Bondi out to tender.

Thanks to their skill, professionalism and business acumen, Let’s Go Surfing won, and they continue to be the only officially licensed surf school at Bondi Beach to this very day. They also hold the exclusive teaching rights to Maroubra Beach and are one of a handful of suppliers at Byron Bay.

They attribute a large part of their success to the people they’ve employed along the way.

“Both of us have been a little bit ‘out of the box’ our whole life,” says Craig. “And I think we have attracted people that enjoy that. There’s a casualness about it. The board shorts and thongs and not having to sort of fit into that ‘corporate type’ box. We’ve also been fortunate to surround ourselves with like-minded people who have amazing skills that we don’t have.”

Seeking skills in others, they believe, is a key part of becoming a successful family-run business.

“Back in the early days we realised we knew nothing about business,” says Brenda. “So we met with business consultants and had personality tests done for both of us.”

It turned out that Craig was more a ‘task’ person and Brenda was more of a ‘people’ person. Knowing each other’s skillsets meant they were able to understand what would annoy each other, what would complement each other, and most importantly, what skills were missing.

“The psychology behind it was really interesting,” says Brenda. “We realised ‘oh we’ve got all these holes everywhere’, because neither of us are detail-oriented people, or financial people. We knew we were having fun. But was the business making money? We didn’t know.”

KNOW YOUR STRENGTHS AND WEAKNESSES

The next step was to recruit members of the team to fill those gaps, allowing Craig and Brenda the freedom to do what they did best. Build the business. And surf, of course.

“You have to be brave sometimes, and admit that you’re not good at something,” says Brenda. “Be a good team player and hand things over to your staff. And try not to micromanage. They’ll soon rise up. Basically, be confident in yourself to hand over to someone that’s better than you.”

“It takes a while,” says Craig. “But you have to lose the ego. When you’re a business owner you have this idea that people look at you as being the master or mistress of all knowledge. But that’s not always the case.”

UNITED BY A SHARED VISION

Although Craig and Brenda worked hard to discover what each other’s strengths and weaknesses are, one thing never wavers. They have each other’s back – always.

Another thing that has been integral to their success is a clear shared vision to ‘change the world one wave at a time’. This runs through every aspect of their business, and not only when it comes to instilling their customers with newly-found confidence in the surf.

From free surf lessons for refugees, to mental health surf programs, Let’s Go Surfing is always looking for ways to give back to the community it calls home.

And – if Brenda and Craig’s passion and respect is anything to go by – Let’s Go Surfing will be changing the world one wave at a time for many years to come.