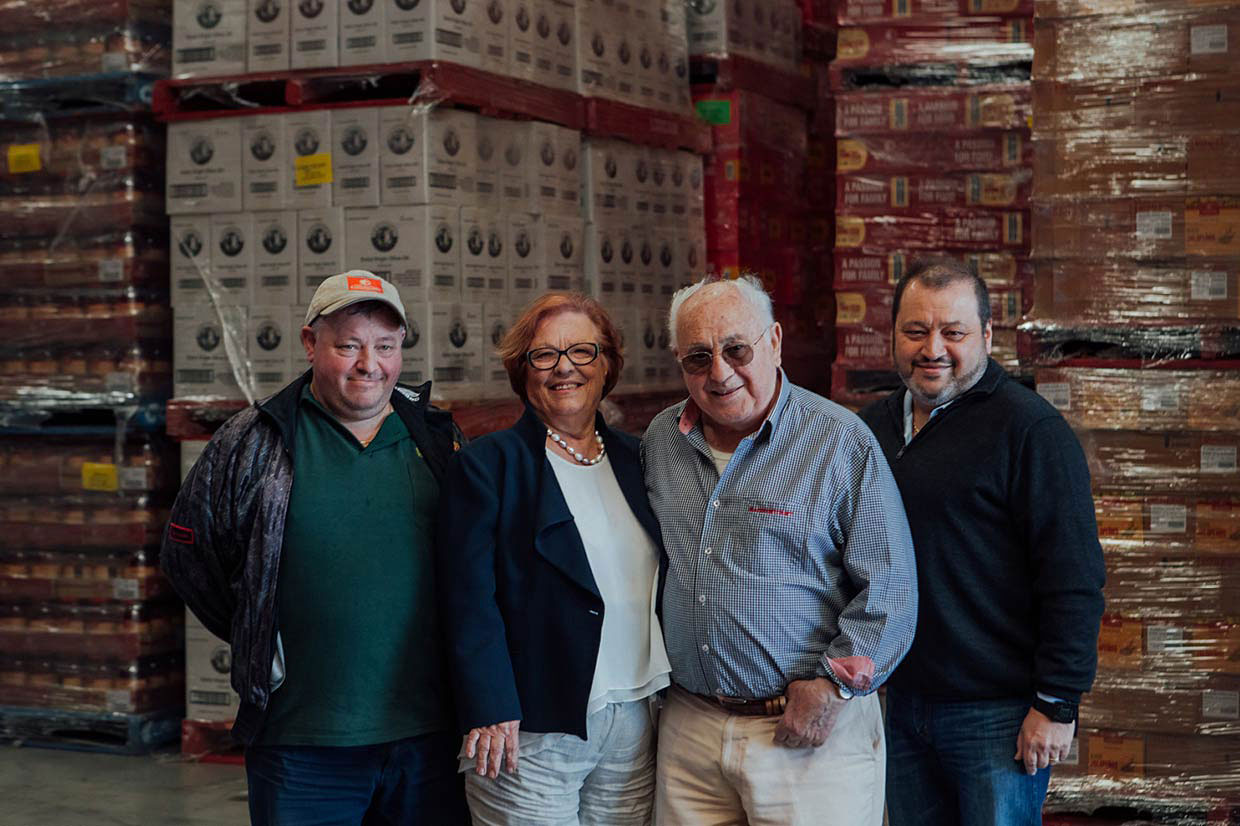 “We came here with nothing. We have never been given anything. But you have to make something of yourself. Some people can work it out and some can’t.” Geraldine Lubrano

“It is the love of food that unites everyone at Sandhurst. If you don’t love food then you aren’t going to last here,” explains Geraldine.

“But it’s also about honesty, communication, teamwork and respect. Basically it comes down to family values. We operate this business as our extended family, and people stay here for years. Some of our staff have been here for 30 years,” says Mimmo.

“We treat our staff as relatives,” shares Vince. “We always try to accommodate their needs. We have their back.”

The Lubrano family explain to me that it’s a good business to be in because everyone needs to eat. But that the more you learn about food, the more you realise you don’t know anything. To the Lubranos food is a lifelong journey.

WHERE IT ALL BEGAN

Geraldine and Vince both grew up in Italy and moved to Australia when they were teenagers. Vince comes from a fishing village and Geraldine from the mountains. Geraldine was the eldest of eight siblings and came to Sydney with her family in 1955, when she was 17. There was no work in Italy so her father decided to move the family out, to seek better opportunities. And when they arrived Geraldine and her sister set about to find work. When they did get jobs, all the money went to her father to help support the family. Her father had borrowed a lot of money to make the trip, and that’s how things worked back then.

“He is a criminal, an illegal immigrant. Stop the boats!” adds Mimmo.

Vince shares with me that he was working on a boat as a deckhand. He received a letter from his mum to say that he had been called to the army. So when they ported in Newcastle Vince decided he might just stay.

“The man is a draft dodger,” Mimmo jokes.

“Am I allowed to talk about that?” I ask. I’m not sure I want to be responsible for the 82-year-old Vince Lubrano being deported back to Italy.

Mimmo laughs and assures me that it is all good and that actually, draft dodgers are very cool these days.

“When I left the ship I had nowhere to go, I slept in a park in Hornsby for a whole month,” shares Vince.

Although Vince’s start in Australia was a little rough, he is a survivor and a hustler and he got himself going.

Vince and Geraldine met in Punchbowl, in Dudley Street at a friend’s house. It was love at first sight for Geraldine.

“There were many young Italian men in Sydney but not many young women so I had a lot of suitors. They would come knocking at my father’s place and I would say no, no, no. But when I saw Vince that was it,” explains Geraldine. Although Vince may have been a little hard to tie down in the beginning, they did start dating and four years later they were married.

They started a shop together on Hurstville Road just before they were married. One side was groceries and one side was wine. Their first son Raymond was born (who now runs production at Sandhurst Fine Foods). They also started bottling their own wine from a vineyard in South Australia. When Raymond was born they named the label Brown & Son. They merged the name of the vineyard in celebration with their firstborn son. Vince was out and about all day long delivering wine and groceries to people. At the time there was no Woolworths or Coles, no pasta, no olive oil or even tomatoes. It was a different world back then.

Eventually, they sold the shop.

“When we sold the shop on Hurstville Road, we had just bought a house and we didn’t have any money. I had the two kids, Mimmo was three years old and Raymond five. I remember Mr Whippy went past and I didn’t have any money to buy ice cream for the kids and I thought ‘this is not on’. So I picked up the local paper and there was a delicatessen for sale in Penshurst. I didn’t have a car and I didn’t drive so I left the kids with the next-door neighbour and I walked. The lady selling the delicatessen wanted 200 pounds for the store. I looked at the shop and although there wasn’t much to the store I had a vision of what I could do with it. I had experience in running a shop which the current owner didn’t have. So I thought OK, I’m going to do this. I took the train to Hurstville and I went to the solicitor that we knew, and said ‘Mr Forest I need 200 pounds’. He used to call me ‘Little One’. He said ‘Little One’ let’s go to the bank. So we went to the bank and they leant me the money,” shares Geraldine.

Wow, things were obviously very different back then. I went through an excruciating process to get a mortgage recently.

“What did Vince think about all this?” I ask.

“Oh, he had no idea, he was at work. He had started working at Santos Coffee,” shrugs Geraldine.

“So he had no idea that you bought a business?” I ask, shocked.

“He came home from work and I said I have bought a business! He was happy,” shares Geraldine.

“So I would take the two kids with me on the bus, we would go into the shop and I built it up.”

Geraldine is one savvy entrepreneur. Although she shares with me just how hard things were for her, trying to bring up two boys while running a business, she did succeed and she grew that business. Her winning secret was that she revolutionised the sandwich. Most people were making skimpy sandwiches and she filled her sandwiches with so many yummy ingredients. She had people lining up at the door. Geraldine sold the business three years later for 3000 pounds. A tidy little profit.

“Mum also saw an opportunity in making dinner for the people in the surrounding apartments. So any leftover meats and ham she would cook up into rissoles. She would fry onions and garlic and as people came home from work they could smell the beautiful aromas. This was when mum first recognised that the senses are so important when it comes to marketing. We carry that learning through to Sandhurst and the way we do things today,” shares Mimmo.

The family shares with me their philosophy around jumping on opportunities.

“There is an opportunity every day, and if you see one you grab it. Don’t hesitate,” says Vince.

Geraldine adds, “We came here with nothing. We have never been given anything. But you have to make something of yourself. Some people can work it out and some can’t.”

THE VISION OF PRESERVED FOODS

Geraldine and Vince’s next venture was to buy Sandhurst Fine Foods, a business in the Cronulla area that had gone into receivership. Geraldine and Vince had a vision for this business – they were going to bring the tradition of preserving foods in Italy to Australia.

“Back in Italy we used to kill one pig for Christmas lunch but we had to make sure the pork would last. And we would use every bit of the animal. We would make salami,” recalls Geraldine.

THE SECRET TO SUCCESS

Sandhurst Fine Foods has grown to become a highly successful Australian business both in the food service industry and in retail. Vince shares with me the secret to their success.

Geraldine adds, “And good communication. We are always talking. Actually, sometimes it can be pretty heated conversations within the family, even screaming. I’m sure it’s hard for the staff because our style of talking is different. If we have something to say, we just say it. Honesty is everything.”

Mimmo continues, “We are good at starting things and running things but we are also good at identifying our weaknesses. We make sure we hire for our shortcomings. We pay people the appropriate money to do a job, and actually allow them to do the job. And they become part of the family. We are a little un-Italian in that way. Italian family businesses generally don’t trust anyone. So they keep people in the dark, pay them nothing and think ‘oh I’ll do everything.’ They then reach their limitations.”

Mimmo tells me that the Sandhurst product range is a combination of what they manufacture here in Australia and what they import. There are many products where it makes more sense to import – the quality is better, and the price is better, and that price saving can be passed down to the customer. The products that they manufacture are the special ones that can’t be found elsewhere. Manufacturing is all about thinking of the clever ideas that no one else does. Where you can create an advantage.

STEP 1: Vince would decide he wanted to make a new product, for example, pesto. So he would start playing around with ingredients and trying a few things.

STEP 2: Next, Vince would share it with all his friends and get their input. Generally they would say it tastes amazing.

STEP 3: Geraldine, with her discerning palette, would pick apart the flavour and send Vince back to keep working on the recipe.

STEP 4: Vince would get mad at Geraldine because all his friends had said it was perfect, but he would still go back to the recipe and keep working on it. This could happen close to eight times.

STEP 5: Finally, when it was ‘Geraldine perfect’ they would go into production.

The Lubrano family are artisanal in their approach to creating new products.

“Mum can walk through the factory and say if something doesn’t smell right. She can taste it and say if something needs more of this or more of that. Mum grew up on farms. You can’t con the Italians because they grew up with food on their back door. They didn’t buy groceries, they grew them. They have an intimate knowledge and an intimate relationship with food. Food is the centre point in their family. And food is the centre of our family.”

“As we always say at Sandhurst Fine Foods ‘passion for food, passion for family’” says Mimmo.

MIMMO’S TIP ON HOW TO BUILD A BRAND

We take the approach of telling our story to get our messages across. This only works when you are always authentic.