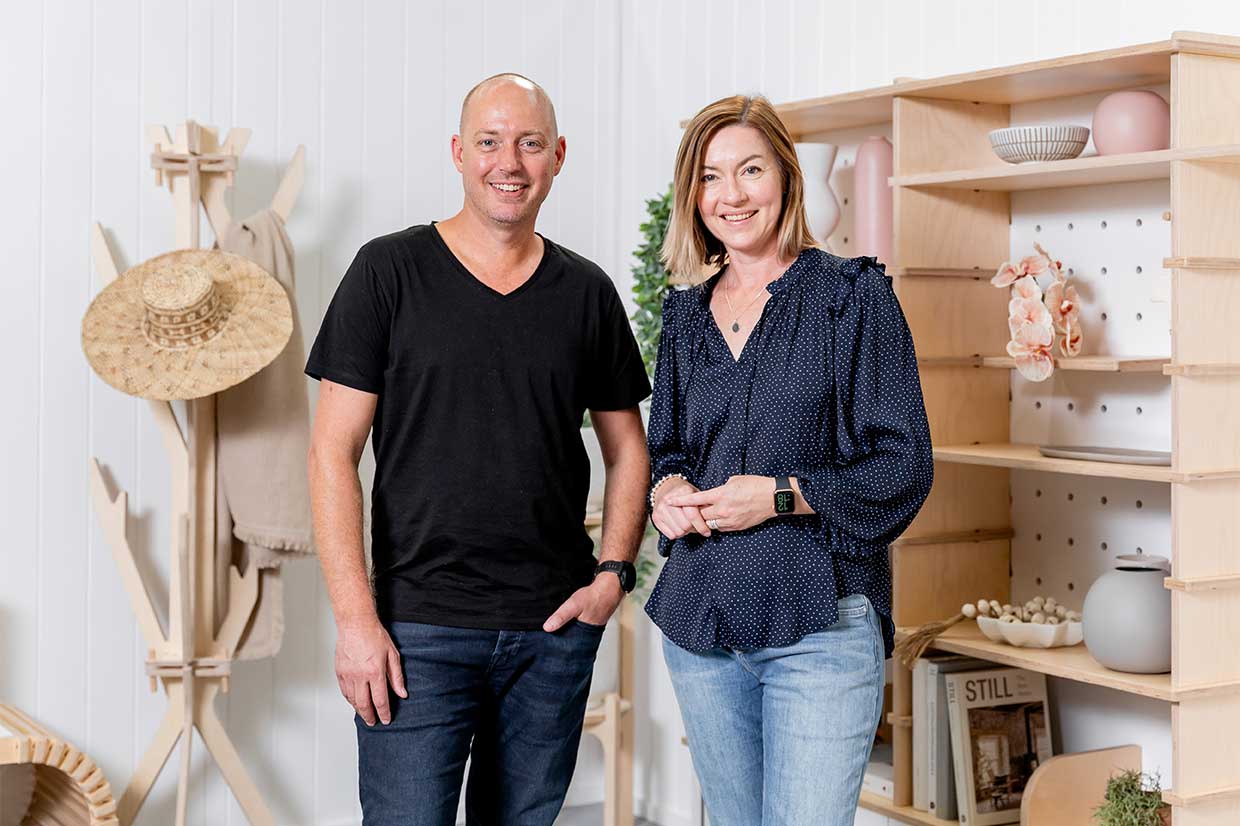 STAGEKINGS – FROM ROCK CONCERTS TO AN AUDIENCE OF ONE

“The Prime Minister did a press release, and we were all watching it on a mobile phone. He said that all public gatherings of 500 people would need to be cancelled from Monday. This was devastating news for our company. Large public gatherings were our livelihood. I rang my parents and said ‘we might lose the house and we will have to come and live with you guys with our three little kids.“

Stagekings is a multi-award winning creative company that designs and builds the most incredible custom designed stages and experiences. Scenes that you would never think possible – from huge music tours such as Midnight Mafia, Robbie Williams and Miley Cyrus to visual feasts such as the Knockout Circus and Nickelodeon. The company was even engaged to stage the Commonwealth Games.

If one has an idea that is so unique that it feels like madness to try and attempt to bring it to life, then Stagekings is the answer.

Jeremy and Tabitha Fleming launched Stagekings in 2015. Jeremy had seen the incredible works of art in the staging and events industry in Europe and realised there was nothing like it in Australia. With a long history of working for staging, event companies and in carpentry he had the skills to get something like this off the ground. Tabitha, who had spent 15 years working in sales and marketing for music labels such as EMI, Sony Music and Universal Music, looking after some of the world’s biggest artists, brought a different lens to the company, that of the client perspective.

They built a team of the best of the best in the industry. Forward thinking, creative artists and production geniuses. And the company exploded with success.

On March 13, 2021 the NSW premier announced that all large scale events would be banned for the unforeseeable future, Stagekings lost all of its work, including projects that were already in production. When Stagekings first started out they rented the huge amounts of equipment they required on a needs basis, but by 2020 Jeremy and Tabitha had invested enormously in the purchasing of equipment. The investment was real and the stakes were high. A drop in revenue to $0 was not something they would survive.

“It was Friday 13th of March and we were in Melbourne for Formula I season, doing a couple of projects. The Prime Minister did a press release, and we were all watching it on a mobile phone. He said that all public gatherings of 500 people would need to be cancelled from Monday. This was devastating news for our company. Large public gatherings were our livelihood. I rang my parents and said ‘we might lose the house and we will have to come and live with you guys with our three little kids,” shares Jeremy.

Jeremy remembers being thankful for the health of his family, but it was a rough time. For not just Stagekings but the whole event industry. With all productions cancelled they had to lay off 12 permanent staff and over 50 casual workers.

TIME TO GET INNOVATIVE

Once Jeremy got through the shock of what was happening he rallied. He had to come up with an idea to create some kind of an income. He began to talk to friends overseas to see what others were doing in countries that had already been devastated by COVID. He spoke to a friend in Ireland who was making furniture with the equipment they used for staging. Jeremy’s head of production Mick Jessop, had furniture making skills. It sparked something. With heads together they thought about what people at home needed most right now, and they came up with the idea of the isolation desk. Within 24 hours Mick had designed a stay-at-home sitting desk and stand up desk and had 3D printed both. By the Monday they had created prototypes. They called this new venture IsoKing.

Jeremy explains that the desks were great, and they came at a time when people needed them most but what really made this new direction fly was the story.

“I did an open letter explaining that we were from the event industry that’s been effected significantly. And we’re making these desks to try and keep our staff busy and keep our lights on. Plus we were supporting the event industry. From the outset we decided to donate $10 from every desk to support out of work artists and event workers. The whole event industry got behind us, and my letter which I posted on Facebook went viral. Very quickly it was seen by millions. People needed desks and they wanted to support those that were struggling.”

Stagekings hadn’t ever focused much on social media; at that time they had about 1000 followers. Virtually overnight they jumped to 15,000. The following week The Sydney Morning Herald got in touch, then ABC Radio and things snowballed. The media coverage was huge.

The more desks that sold, the more people Jeremy was able to hire from the events industry to service IsoKing.

The agility of Jeremy, Tabitha and Mick was phenomenal.

“On the Sunday we had the idea, by Monday we cut the first prototype. By Monday evening Tabitha had put together the ecommerce site. On Tuesday we took photos of the desks and by Tuesday evening we went on sale. By Wednesday we’d sold a bunch of desks. By the end of the week we had pulled our people back in for work. And that wasn’t even enough to keep up with the demand. We did a call out to the event industry,” smiles Jeremy.

Jeremy found the value in social media. He did a social media call out to anyone from the industry that needed work, to come and help sand, package and deliver these desks.

Jeremy is an inspiring leader. He seems to have a knack for finding a niche need, then running with things quickly to build momentum. But he declares that he couldn’t do any of it without the support of his business partner and wife Tabitha.

“She keeps me level. I’d probably run off in some direction that I shouldn’t if I didn’t have her to bounce ideas off and pull me into line. She’s very good with the accounting and HR side of things and so we balance each other out,” shares Jeremy.

Jeremy believes that family business has an advantage because of the special trust family members have in one another. He and Tabitha trust each other implicitly and that is certainly the best of foundations to build a  successful business.

THE TEACHINGS OF COVID

The biggest learning to come out of COVID for Jeremy… to not have all your eggs in one basket. Rather than just focusing on outdoor events and the music industry Jeremy makes sure work is coming from multiple industries. Film set building is just one of the diversifications he has focused on.

And IsoKing is still going strong. The furniture is beautiful, practical and accessible. And the range has grown beyond the desk to products for the home. People want Australian made and they want it fast. This is something that Jeremy can deliver on. The company is now warehousing in all the major cities to ensure speed in delivery.

Out of crisis comes opportunity. The key is to seizing that opportunity and running forward without fear.

Jeremy, Tabitha and the team at Stagekings inspired the nation with their forward thinking commitment to help an industry and its people that they hold dear to their heart.

And in return, the nation fell in love with Stagekings.